Talking Paws
Talking Paws, run by Rachael, Highly Recommended Jan Fennell Dog Listener. Rachael can help you with any non-medical behavioural problem, or simply set you on the right path to a fulfilling relationship with your best friend.

Hi Mum, I had a great week, on Tuesday I went for a walk with Louis, the. Today I went to Nayland with Hansi, Dritta and Toby, we couldn't go in our normal field because there were big brown and black beasts in there so we played in another field for an hour and there was a great big puddle in it, this is a picture of me running through it.

Then we met a big black dog and sniffed him for a bit then went home. 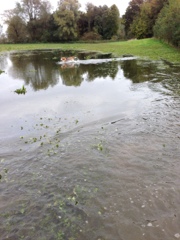 Posted by Talking Paws at 12:41 No comments:

Hi Mum, I had a good week this week, on Tuesday Pippa decided to join us, and Rachael had me on a longer lead so I was able to jog a little bit which was fun, then Wednesday and Thursday I had Rachael to myself, I was feeling a little anxious the last couple of walks, Rachael thinks its because sometimes the kids at the school go jogging round where we walk and I get a little frightened as there are so many of them, but Rachael assures me that they won't, I don't know how she knows this!!

Now I'm going to have a sleep and wait for you to come back.

See you later
Love Louis xx
Posted by Talking Paws at 05:10 No comments:

Hi Mum, I had two lovely walks this week, on Tuesday I went with Louis which was good fun and I was very well behaved then on Friday I went with Toby. At the start if the walk I refused to walk next to the children's playground, Rachael wondered if something had happened there, so we went a different way. I had a lovely run with Toby, boy can he run, I had a job to keep up.

Horse Trials Through the Eyes of a Dog

Talking Paws: Jan Fennell's Weekly Topic: Horse Trials Through The Eyes of a Dog   There is nothing unusual about horse owners having dogs too and both can become very famili...
Posted by Talking Paws at 07:57 No comments:

Talking Paws: Jan Fennell's Weekly Topic: Process Not Outcome   Whenever a dog owner talks about ‘training’ their dog there is an implication that the ‘trained’ dog is the ...
Posted by Talking Paws at 08:03 No comments:

Talking Paws: Jan Fennell's Weekly Topic: How Lucky We Are That We Can Choose Our Friends  It was announced this week that t...
Posted by Talking Paws at 10:08 No comments:

Hi Mum, so on Tuesday I went to cobbers place with Hansi Dritta and Toby, it was great fun then today I went to Bures with Stanley and played by the river, this is a picture of me sitting by the water. 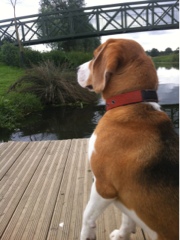 Posted by Talking Paws at 04:56 No comments: